Monday
This day was often called the Devil's birthday. This meant that it was washing day. Underwear was changed on a Sunday morning and water having been collected, the dirtier clothes were put into water to steep. If the rainwater tubs were empty and dry then all the water had to be carried from the street's communal tap. To carry two pailfuls together without spilling a girth was used. This was a square frame constructed of four pieces of wood or a circle of wood the sides of which rested on the edge of the pails. When the carrier stepped into the frame it was easier to carry the pail in one hand. Some people were lucky enough to have a set pot in a shed or in the lean to back place. This was like a huge iron cauldron set into bricks with iron bars underneath for a fire to be lit. If there was no set pot a huge pan of water had to be kept boiling on the kitchen fire. The white clothes were the first to be put into the poss tub. This was a beer barrel type container with metal bands around it. These could be renewed or repaired by a visiting tinker - often a gypsy. Some washwell powder which was bought in cotton bags was sprinkled in with soap shavings and the possing began - thump thump ! The posser was a thick strong piece of wood which was much thicker at the base. At the top was a piece of extra wood for gripping and holding the stick. If two people possed together it was called double possing, one lifting a stick as the other pounded hers down, thus making quite a rhythm. 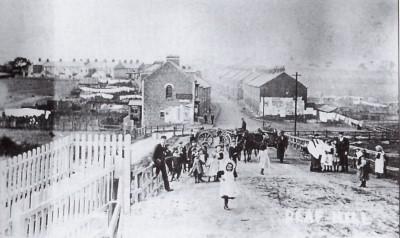 The way to the station before 1912

The whites were then lifted and put through the mangle taking care not to let any buttons go through. Then the dirtiest parts had to be soaped and scrubbed on the wooden table. The soap was a long bar of Sunlight or Lifebuoy measuring about a foot but cut into two pieces. Next the coloured clothes and the towels and , lastly the very dirty pit clothes were done in the same way before the tub was emptied. Everything was repeated three times. The only difference was that the whites had to be boiled, probably with some soda in the water. When the whites were ready for the last rinse it was a blue one. This was managed by squeezing a little bag of Dolly Blue into the water to make the whites whiter. The pinnies, shirt collars etc. Had to be dipped into Robin Starch to stiffen them. Lines for drying clothes were strung across the back street and sometimes just after the line had been filled with drying clothes, the coal cart would come to deliver someone's coal. Then there was a rush to take the clothes off again. The cart just had to lower the back piece, raise it up on end and all the coal would tumble out onto the street to await someone to take their shovel to put it through the small trap door higher up the coal house wall. It was certainly a tantalising time.

What were called lace curtains were very coarse ones and often cream. If these needed washing it was extra work. They had to be well creamed with a cream dolly, similar to the blue one, and then starched. When they were dry two people had to pull at each end to stretch and get them into shape.

When the washing was almost dry, every garment had to be properly folded and placed in a pile ready for ironing. If the day was wet everything had to be dried indoors by hanging them on the clothes horse. This was two wooden frames with bars across and then hinged together.

During all this washing the usual housework had to continue, such as emptying ashes, making dinners and preparing baths for the men coming in from their various shifts plus the cleaning of the pit clothes. It certainly was not an enjoy-able Birthday.

Weekdays
The day after washing day was another very busy one. People very rarely had time to iron on washing day. The usual household chores still had to be done as well as the extra ones. There were two types of iron - flat irons and box irons. Both types had to be heated on the fire, even on very hot days. Most fireplaces had a type of bracket hanging on to the bars so that flat irons could be stood facing the bars in order to be heated. If they were put on the fire to be heated, a slipper was used to prevent the clothes from being dirtied. This was a shiny piece of metal which clipped onto the base of the iron before you started press-ing. The box iron was a rather heavy affair which had a lid. A shaped stone was put into the middle of the fire and when it was really hot it was plucked out with the aid of a long poker and placed inside the box and fastened down to  make it ready for pressing.   >>>