Opening of Galbraith Terrace. Chimney stack of old pit in the distance. 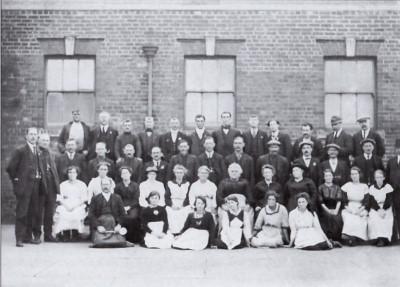 Mr. Saxton and his horse Billy had the unsavoury job of "cleaning the midden at Trimdon Grange" Billy was a heavy draught horse, well fed, groomed and sleek, with shining harness with all his brasses glistening. He pulled Mr. Saxon and his cart with as much elegance as was possible for a very heavy horse. Mr. Saxon would sit, reins in hand smiling proudly, for all he surveyed. Billy knew that he was loved and showed it, it was a spectacle to see them on their rounds, "Muck Miden" man and his beloved horse.

One of our favourite games as children (we were not allowed to call them kids) was, "Knocky nine doors". Our door was number 9 was even a victim up to number 28. There wasn't a lot of regard to counting numbers correctly, really, any old door would do. The doors were the old type, plank braced, and well over their real use, so that too much knocking could result in a pile of firewood.

The netties were almost past their prime. The wooden seat had a polo style twelve inch hole, and when my bottom, when a child was much less, I used to balance over this hole in fear of a fate worse than death. I never knew how quickly to get it over with.

The doors to the netties were the same as the doors to the houses, plank wood, opened with a sneck. They were too flimsy to keep out the draughts, and if you took a candle with you to the toilet, it was soon blown out. In the home, lighting was provided by paraffin lamps or candles, four a penny. Some of these lamps were really beautiful, and now in much demand as antiques. They had tall glass chimneys. Usually marked "grifon" or "Pfenic made in Germany". Due to their fragile nature, these glasses had a very short life. They often got blackened with smoke from the wick, and so the slightest knock or draught when being washed would crack them. If there was no spare , then candles had to be used.

Due to the absence of electricity, when we got wireless (Marvellous invention) sets were powered by glass accumulators, 6 volts lead acid type and a grid bias high tension battery, 110 volts.

Periodically the accumulator needed recharging and we took them to Mr. Hill, the watchmaker. The wireless tuning dial did not have wave length numbers as now. Droitwich, Hilverstone, Moscow, Luxembourg, Riga, Berlin, Prague, San Marina, Vatican, Rome, etc.. The world was your oyster, along with Dick Barton, The Lost World, The man in Black, Paul Temple, The Archers, The Ovaltinies. The latter we could only get at odd times, but B.B.C. London Broadcast racing results. Previous to this wonderful entertainment we had a wireless of sorts, a crystal set, called the "Cats Whiskas".

Only one person could hear it at a time, with the aid of earphones. The whisker had to touch certain points and if you were lucky you may hear something from Newcastle. Ingenious folk tried to enable two people to hear at once, by standing over an aluminium basin containing the earphones.