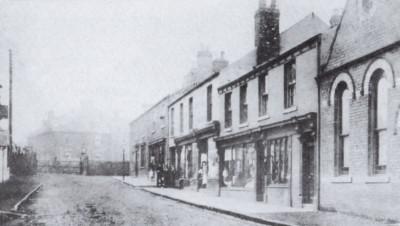 Front Street Trimdon Grange - showing the old Dove Cote, the Wesleyan Chapel and part of the signal box. The shop next to the chapel was pulled down to make the new road. 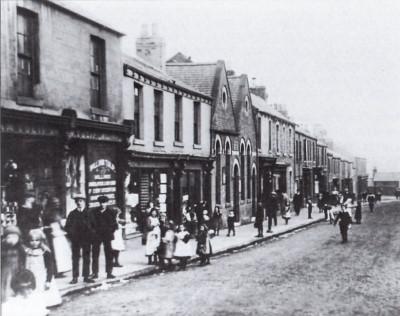 I was born in 1927 at Trimdon Grange at the home of my grandparents. My parents lived in Coffee Pot Street, Trimdon Colliery. It was a street of houses made of old stone. It had one very large bedroom with two rooms downstairs. One was the living room and kitchen , the other was a back kitchen. We had outside toilets and water taps. The toilets were in the back street away from the house. They were in sets of four. Ashes from the fire and kitchen waste was put down the netty as they were called.

In the kitchen we had a very big fireplace with an oven at one side and a boiler at the other. The fire never went out as it heated the water and kept the oven hot. We used the oven for baking bread, tea cakes, pies, cakes etc.. The boiler was always in use for washing clothes, baths, washing up and other household jobs. Coal had to be kept in the back kitchen in two buckets (pails). As they were put on the fire, they were refilled. Coal was free to pit men - they got a load of it every three weeks. Water was also kept in the house in pails, as it was taken out of the boiler. The boiler was refilled as were the pails. I spent a lot of my young days filling coal pails and water pails, but for us it was a way of life so we just got on with it.

Always we had kept a pig in the pantry. Hams hanging up on the wall and legs on the big shelf. Hens were also kept, which meant we always had fresh eggs and bacon/ham. A big allotment was used to grow our own vegetables. Wages were low but we never went short because we were so self sufficient. Proggy and Hooky mats were always in the frames as they were the only things that were hard wearing on the floor.

School Days
We had to walk over half a mile to school, come home for lunch, walk back to school and then come home at 4 p.m. when school finished. After tea we used to change in to old clothes and shoes to play out in. Going for walks over the lodden was something we did often. Also we used to play in the plantation or go to the Rec, and at times we just used to stay in the street and play games.

On Saturdays we went to the pictures and Sundays we went to chapel, then visited grandparents/aunts/uncles/cousins. We also took young children in prams or pushchairs for walks, so their parents could get on with jobs that needed doing. The parents were very grateful, especially on washing and baking days.

When at school we always had to do as we were told, but my school days were happy days. I remember one boy with a stammer. The teacher asked him to read to us. Everybody laughed when he read. Teacher got annoyed and asked him to get her a glass of water While he was gone the teacher told us not to laugh at him again and anyone who did would get the cane. Those nearest to her got slapped with a ruler to let the rest of us know she meant it. No one ever laughed at him again. Another time I remember was during a cookery lesson, I had been asked to bring in a woolly to wash. some girls had been asked to bring in a collar to starch and others a towel to boil. I put my woolly in the boiler. it came out like a sponge. I took my rice pudding home and after we had eaten it, my brother asked where his pullover (gansy) was. He cried when he saw it and I was told off for not paying attention.