Newspapers played a vital part in the lives of people long ago.

For one halfpenny they were very useful indeed.

After the people who could read had finished with them, they could serve as makeshift tablecloths or be used to wrap up the men's baits. When the fire was low a sheet would be placed in front as a blazer to encourage the fire to burn.

Crumpled paper was used to light the fire.

Drawers were lined with paper, and pantry and cupboard shelves were spread with paper, the overhang being cut to make a pattern.

One vital use was for squares to be cut and a pile of them to be threaded with a piece of string to hang on a nail at the back of the netty door. Toilet rolls were unknown here in those days. This was one of the jobs children were able to do as well as collecting piles of unused papers to take to the fish shop and the sweet shops.

Fish and chips were wrapped in newspaper and squares were rolled into cones to hold sweets when sold. The children were rewarded with a few sweets or chips in return for the paper piles.

Of course, there were no nude pictures in the papers, not even of ladies in low cut dresses, and certainly no foul words.

Newspapers were aids to beauty, for strips of them were used to roll hair into curlers. 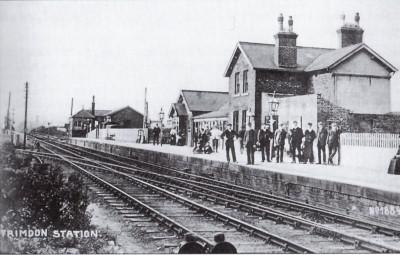 1837
The Great North of England, Clarence and Hartlepool junction railway formed and constructed an eight and a half mile line from Wingate to one and a half miles north of Ferryhill for mineral traffic instead of going via Middlesbrough Port. Ferryhill was an extremely busy Railway Station then.

1846
In October passenger services opened between Hartlepool and Trimdon, and later a mineral line to the old colliery. So now Trimdon Colliery was also called Trimdon Station.
Actually the original station was at Trimdon Grange, probably just a stopping place behind the "Swinging Sign" pub in Rose Street (Chapel Row), which of course then changed it's name to the "Station Hotel", but was commonly called "The Duck" after the original landlord.

1851
The Station was built and in the first year it took over £224 in fares. From Trimdon to Wingate was 3d. return. On Saturdays folk went to Hartlepool for the excursion of one shilling return, they would do all of their shopping and all purchases were then wrapped in brown paper and firmly tied with string. Shop assistants had to be very proficient in these matters. The big treat then was to go to the theatre, there was The Grand and The Empire. The Empire was a lovely building in Lynn Street and after purchasing entry tickets, you walked up the stairs and through the foyer where there were always comfortable settees around a coal fire. Seated in the audience, it was a thrill to see the fire screen come over the stage, then watch the orchestra come in and tune up. In the interval ,part of the roof lifted for fresh air. Many of the old well known stars made their debut here and its such a pity this lovely old building was destroyed.

Trimdon Station had good staff. The building itself had the Station Masters house, the Ticket Office and a waiting room where in winter a coal fire was kept burning. There was also another small waiting room at the end. The office had a glass covered porch joining with the waiting room where plants hung as well as flowering plants set by the platform. The entrance to the Station was a down-ward path from the bridge near the store (this bridge was destroyed and the bank lowered in the 1980's). Another entrance from the Trimdon Grange side, via the black path, (which was the only way to travel from the Colliery to the Grange) led through a heavy gate and over the rails. By this gate was a squat brick building where the Hartlepool fish women kept their fish and old prams. There was a signal box and a short row of houses facing the down platform for the railway workers.