By the Late Joe Ebblewhite

The square in Trimdon Colliery was a popular meeting place. Once upon a time there was a market held there on a pay Friday night. The highlight was when travelling theatres paid a visit. These were called "Gaffs". They were owned and acted by a whole family. One family was called Holloway, where their little boy Stanley acted the part of Willie Carlyle in East Lynne. His real mother acted the part of his stage mother who brought tears to the eyes of the audience when she cried over her son - "Dead, and never called me mother". Stanley grew up to be quite a famous character. It was thought that he may have been born in Thornley. Other dramas were plays such as "Murder in the Barn".

The horses that brought the players and the equipment were stabled at the nearby Royal Hotel. This pub was built by John Carter, certainly before 1843. It had a brewery and he originally brewed the beer for the other local pubs. The brewery was later converted into two dwellings, now demolished. The Royal was owned by the Carter family for more than 100 years. It was like a home to the miners when the old pit was starting up being known as a good eating place.

When the colliery houses were built, they had no sinks or drains, but a gutter ran outside the door the length of the street to the drainage sink at the end. All slops, dirty and clean water got "hoyed" (thrown) into the gutter, and also the teapots were emptied into it many times a day. To save journeys to the communal tap, everybody kept a barrel under the spout to catch the rain water which was used for washing purposes.

Between the wars the Trimdons had its own Operatic Society. "The Mikado" was performed in the Victory Assembly Rooms, "Iolanthe" in the Picture drome and when the Welfare was built it was the hall for "The Count of Como". 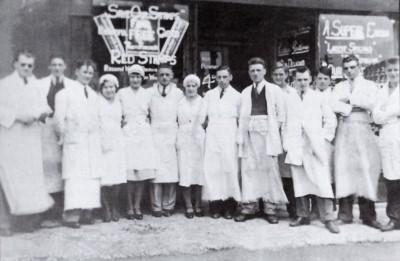