This pit was sunk in 1870 and closed for good on 24th February 1967. No one can really find out the origin of the word Deaf Hill. The nearest solution I think is when land did not yield much, it was called "deef" or dead (deed) land. The name of the ecclesiastical parish is Deaf Hill cum Langdale (Langan Dune) which means the long valley, and there is a long valley behind where the pit was, and the hill by the footpath to Wheatley Hill was called Sleepy Hill, which might refer to the old timers idea of deaf or dead land. The first Vicar, Dr. Sagar of St. Paul's lived in the vicarage at the top of Sleep Hill looking over the quarry. This was later the Coal Board Farm 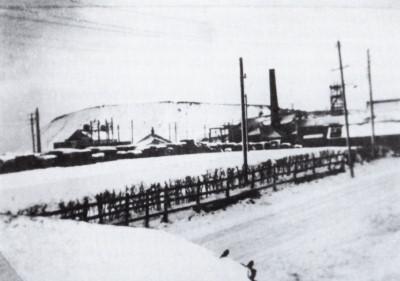 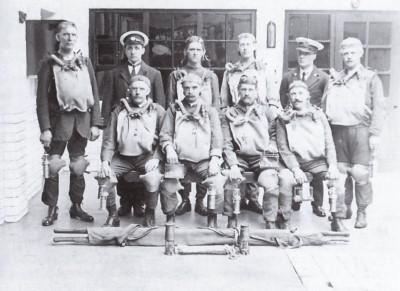 In 1919 the pit was flooded and a pony drowned. It was through the hard work of the Officials and volunteers that it got into production again. The pit was idle for 6 months.

In 1944 Hutton seam was closed and 160 men went to Blackhall Colliery via T.M.S. buses
In 1951 Deaf Hill was awarded production bannerette for the greatest proportionate output in County Durham during the last year.
In 1955 surface work combined with Wingate Colliery, when the plant for dealing with coal at Deaf Hill was dismantled, and a light railway was laid for Deaf Hill coal to be drawn overland to Wingate.
In 1956 Junior Ambulance team won National Competition.
Deaf Hill Pit closed on 24th February 1967.
97 men went to Easington Pit
70 men went to Blackhall Pit
45 men went to Thornley Pit
49 men went to Shotton Pit
76 men made redundant by age or illness
61 men retained for salvage
5 men moved away to Warwickshire
12 men moved to Mansfield.

In 1910 a Rescue and Aid was passed so a few men from Deaf Hill pit travelled by pony and trap to Houghton - le - Spring for instructions. They learnt the use of breathing apparatus, gas testing with canaries and first aid. Later they had more equipment. In those early days when a man was lamed (injured) he was either carried home on his mates back or , if the injury was severe, he'd be transported in the horse wagon. Men were paid fortnightly on a Friday. The week when they had no pay was called Baff week, so insurances, bilis etc., were all collected on pay week. Three marrers (mates) worked in different shifts, fore, back and night. One marra who was not at work would collect their pay slips from the Colliery office and then collect the pay according to the amount of work done.

Many houses had a slate on their wall with a time chalked on it. This was for those in first (getting up to go to work very early in the morning). This was a guide to the "Caller up" man. He came round to knock up the men to make sure they would get to work. Very useful for those without an alarm clock. He often used a long stick to tap on the bedroom window.

There were good places, bad places, and worst places for working down the mine, some narrow, small or wet. To attempt fairness these places were drawn for, four times a year, and they were called the Cavils. The women on that day did various superstitious things to ensure a good cavil (place) for their men. The workers in the pit had very close relationships and were always ready to help each other. 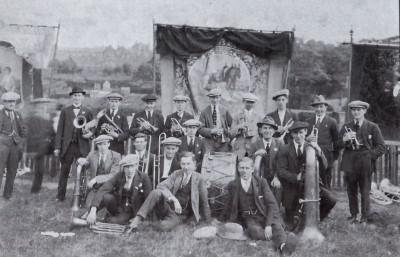 Temperance Band at Durham Gala 1924. Banner draped in black for a fatal accident during the year.