My nursery days were spent in the pit yard. From my pram I was able to touch the wagons going to and fro from the yard to the main line, that shows how close the houses were to the workings.

The railway station was only three or four hundred yards down the road. The railway had a fascination for me. I got to know the times of the trains arriving at the station and there I was, watching the unloading and loading of the goods van.

Stood outside the station was a flat cart and horse. I used to watch it being loaded up and sent off. The mail was different, it had a small pony and trap to take the mail bags to Thornley and other places.

Going back to my school days, I remember the men who had children going to the Catholic School, laid a path of ashes and cinders, got from the hearths of the fireplaces. It went all the way through the foxgloves from the Grange to the school, just so as to keep our feet reasonably dry and clean, away from the wet grass and mud.

Across the railway crossing in the Grange they built a Cinema called the 'Drome' of course it was silent films and a women played a piano.

We paid 2d. to get in and only got that if we behaved ourselves, of course if we did do anything wrong our Mother's were standing at the door with a leather strap in her hand. Discipline was strict but fair.

Another pastime for men and older boys was handball, fierce and competitive, on a weekend with money in their pockets, they played pairs, for 2d a game on side. Football was another great pastime.

When I was 14 years old I went down the pit for the first time. It was a matter of two hundred yards from my front door to the pit shaft. It was a frightening experience. 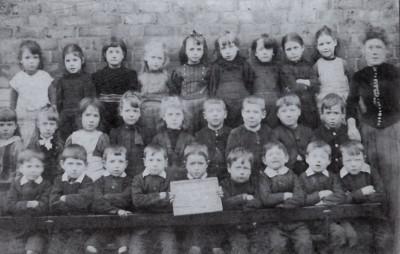