With the amount of different articles women wore, it must have taken them a long time to dress.

First there was a shift (vest). This was a large, long cambric or linen affair often with short sleeves. Then there was a corset. This was a contraption to help keep a good figure. It was embedded with steel strips and whale bone to keep it rigid, hooked all down the front and with laces running up the back. These laces could be pulled tight to try to make a slim waist. Rich folk could have corsets specially made for them having had their measurements taken and sent off to a specialist firm who would then make a corset to those sizes. These stays (corsets) were called Spirellas. 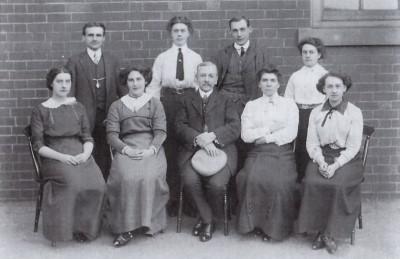 In the place of the brassieres of today there was a home made affair. It consisted of some material about fifteen inches wide and perhaps over two feet long according to the size of the woman. In the centre was a hole made large enough to fit over the head and there was a tape attached to each corner. The two back tapes were brought to the front and tied and the two front ones were tied at the back. AU of these tapes were neatly ironed after washing.

Bloomers or knickers were made of lawn until some thick fleecy ones were brought into production. They were like two legs joined at the top and fastened at the waist by linen buttons or tapes. Next came a flannel waist petticoat. Red flannel was popular as the red was supposed to give warmth. On top of this was another white lawn petticoat with petticoats fastened by tapes or buttons. All these articles apart from corsets would be hand made and very often embroidered in white, using various stitches such as the many sorts of feather stitch. To be extra fancy, especially with the younger folk, a camisole was worn under a blouse. It was similar to a blouse but with short sleeves and much embroidered or trimmed with crocheted lace. Combinations were also often worn; they were like a long vest with two open legs.

After marriage women mostly wore black. Their clothes consisted of a long skirt and a separate bodice (blouse). The skirt would have a short narrow fringe running around the inside of the skirt hem. This was supposed to collect the dirt off the road. The bodice would have a full lining with hooks and eyes fastening down the front, and the blouse itself fastened with buttons. Often they were trimmed with braid or beads and if not made at home they were made by a village dressmaker.

Black wool stockings and laced or buttoned boots were worn, stockings often being home knitted before lisle ones came into fashion.

For special outings, coats and hats were worn. No woman would ever be seen on an outing without her hat. These were magnificent creations and must have been very heavy. They were trimmed with feathers, ribbons, artificial flowers etc. And the hat was secured to the hair by hat pins. Women over 40 or 50 often wore bonnets, smaller editions of hats but kept on the head by wide moire ribbons fastened under the chin.

These hats were rarely bought over the counter but were ordered to be made by a milliner in her shop.

Hair (there was no bobbed hair) was piled upon the head and fastened with numerous hair pins. One fashion was to have two little pads placed either side at the front of the head and another round pad in the centre, then the hair was swept over all. To neaten it up a switch was pinned round the centre pad. A switch was made from hair combings. There was some pride taken in having hair long enough to sit on it. After the hair was combed, the comb was cleaned and the combings collected and put in a china box with a lid that had a hole in the centre. These boxes were part of a dressing table set. When a good amount was collected a specialist made them into a switch.

The working woman was much plainer whilst working. Her hair would be scrapped tightly back into a bun and if she was doing dirty outside work she would often wear a man's old cap back to front. A check apron would be over her pinny and often to keep that clean a piece of old hessian sacking covered that. Women in the home were rarely seen without a pinafore - as though it were a badge of office.

Lucky women would have a fur to wear on excursions often including the animals head and tail. Cheaper neckwear was a feather boa. This was a length of numerous small feathers of various colours long enough to go round the neck and hang down at the sides. Of course, an all black one was kept for funerals.

There were barbers for men but often they just cut each others hair unless there was a special occasion. Hairdressers for women were unknown in the villages until well into the century when permanent curling was invented. This was done by means of an electrical contraption, the victim having tubes strung round her head as if she was strung up. Curling tongs were also heated and used to roll the hair into curls and waves. For naturally curly hair, water waving was used.