Men wore vests and linings which were long pants. On the top they usually had a flannel shirt, a waistcoat, jacket and trousers. Trousers were kept up by galluses (braces). Socks were invariably home knitted and boots were laced ones. Caps with peaks worn on a day to day basis for dress, and invariably for funerals, a bowler hat was worn if possible. Bought starched collars were fastened to the shirt neck by studs back and front. Ties could be bought or were often knitted by the children. 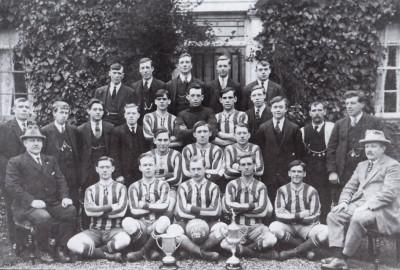 The waistcoat would be enhanced by an Albert and watch. An Albert was the watch chain starting at one side pocket and cross-ing to hold the watch in the far side pocket. Sometimes instead of a tie, a muffler was wrapped round the neck and the ends tucked into the braces.

To be 'swanky' men could wear spats. These were short cloth gaiters which just fitted round the ankles and a fancy walking stick could enhance the picture further. Long, leather gaiters could be bought for children. A button hook was needed to fasten these to the knee. Heavy boots, long blue stockings and old cast off suits were the dress for pit work with a pair of hoggers, these were like shorts. Men often wore a strip of wide red flannel round their waist. This was supposed to ward off back ache. Sometimes it was a deep circle of knitting called a body belt.

Gloves were always in evidence and women and children rarely felt really dressed without them. Fine kid gloves were often used and before putting them on the fingers, were opened out by means of a glove stretcher. To darn fingers of wool-len gloves, a finger darner was used. This was a smooth piece of wood shaped like a finger placed into the glove. A wood darner shaped like a mushroom was used for the frequent darning of socks and stockings.

Pyjamas were rarely seen. The only change in men's fashion was when plus fours appeared but they soon died out as did Oxford Bags. A boater was a straw hat called a straw benger. Trilby hats eventually became more popular than bowlers.

Men mostly smoked a pipe. Rolls of tobacco came with the groceries. The tobacco was cut into pieces and put into the pipe bowl. Ladies twist was like a thick string of 'baccy' and this was taken down the pit to be chewed as no matches were allowed down below. Woodbine cigarettes were 1d. for a packet of ten. A famous song was 'Ten little fags in a fancy packet, Ten little fags that cost one dee'

News from the pen of the Late Mr. Arthur Langlands. December 19th 1848.

A most singular accident occurred at Trimdon Colliery a little boy, nephew of a pitman named Dinning, had been sent for some milk. Whilst carrying it home, he fell and spilt it. On informing his uncle of the mishap, the latter threw a bag of gunpowder at the boys head, and the bag, bursting by the violence of the blow, a portion of the contents went into the fire, and the whole exploded.

The boy as well as another child, was killed and the other inmates were badly burned - Fordyce Records.

At this period the village shop sold gunpowder to the miners who had to furnish their own explosives.

Trimdon Colliery and Deaf Hill were renowned for sporting activities, handball, quoits, whippets, potshare bowling, pigeon racing, football and cricket. The ball alley at the Workmans Club was the largest in the county, opened in 1925.

Dempsey Gorton, a famous Trimdon Character, played the first game against Joe Elliott of Trimdon Grange 'Pompey' King of Trimdon Colliery was fives (handball) champion of England in 1884. The first football team in Trimdon was known as Trimdon Heroes.

Markets were held in Trimdon Colliery Square. Lighting was gas on the stalls, a sight once seen, always remembered. Several artists used to attend, they painted pictures and sold them. Men dressed in cowboy clothes using bull whips used to entertain by knocking coins out of the youngsters hands, also cigarettes from mouths of older people. Many families in Trimdon have Welsh names such as Evans, Morgan and Thomas. This is mainly because during the last years of the nineteenth century when miners at Trimdon Grange went on strike, the Colliery owners brought in miners from Wales.

These men brought their families and came here expecting to find work and homes. In many cases, they had to fight their way to the pit through the ranks of the men who were on strike. Soldiers had to be called in to keep order, many of these men stayed, however, and it is their descendants who still have their Welsh names.