The first shop was T. L. Scott's the Chemist with gas street lighting.

Trimdon Colliery had quite a variety of shops. Some colliery housewives sold sweets and home made ginger beer from their homes. Next to the Temperance Hall and the Primitive Chapel was Station Town Co-op which could supply all needs from butchering, groceries, drapery, floor coverings etc. Past the station, down the bank, was Paul's, the grocer plus the post office. The telephone number was just simply the number 1. A little further up the street was Sayer's, the printers. The actual printing was done in the shed in the back garden ! Across the road was the bakers and sweet shop owned by the two Miss Robsons. Commercial travellers could stop here for a cup o tea and a snack behind the curtain which divided the shop. At the end of the block was Temple the tailors. The next opening had Swan's sweet shop and further up was Innes the grocer.

Travelling back to the Colliery area, past Alex Purvis, we had Harry Baldwin's the newsagent who later kept a supply of library books for hire for a few coppers a fortnight. Next was a kitchen sweet shop run by Nellie Kell, who also had a tea an sweet shop on Hart Sands. After that was Maughan's the milliners. Next to t he opening was Elliot's the drapers run by mother and daughter, Olive, who was a dressmaker. Two butcher shops were next to each other, Jackson and Parkin.

Pringle's was another grocery business attached to a hat shop run by Mrs. Pringle senior. Hill's was a jewellery shop and the father Hill was also a watchmaker and gas installer. Another grocer's shop was Hall's which was at the end of this block which was called Ellis Street. This name and the date of the street's construction was carved on the wall but is now, unfortunately covered over and so its history is now lost. By the pub on the next block there had been a kitchen type pawn shop and at the end was the well known chemist shop owned by T. L. Scott. 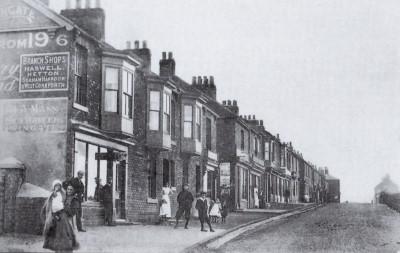 In the square was the Colliery post office by the old primitive chapel - later the reading room. This was run by the Stoves family. The post office in Station Road was the main one and the postal address for the Trimdons was Trimdon Station S.O., Co. Durham - S.O. meaning sorting office. Opposite was another grocery business run by another member of the Stoves family. Goods from these businesses could be delivered to the door.

The street names were often very obvious e.g. Pit, Square, Tank (it had a large water tank at the end in case of drought). Bicknell, Lawson, George etc. were named after prominent people and of course, Back, Front, Single Streets spoke for themselves.

Trimdon Grange, like Trimdon Colliery but unlike Trimdon Village, was well supplied with shops in Chapel Row (Rose Street was the post office after it was transferred from Front Street). At the top of Rose Street was Mason's the grocers. Over the crossings into Front Street was a greengrocers owned by my grandfather, John Edwards. He was the first one to bring bananas into the Trimdons. People thought they were to boil and I heard of one girl who ate one skin and all. Those without gardens could buy a pennyworth of broth which meant a selection of vegetables for broth making. He also had a horse and cart round and was an agent for S. S. Eades of Lynn Street, West Hartlepool selling organs. He was the organist for the old Wesleyan Chapel in Trimdon Colliery.

Quite a big establishment next door belonged to the Tulip family. It was a large grocery shop also dealing in wines and drapery. Part of the drapery was pulled down to make way for the new road which opened c.1920. The Tulips lived in a big, square, grey house at the bottom of Tulip's field. I believe it has since been called Butcher's field but I don't know why.

Past the Wesleyan Chapel there was a variety of shops including Sparks, the un-dertakers, Barkers, the drapers and a barbers shop. Hilda Roe's was a shop that sold everything including paint and paraffin. There was a branch of the Coxhoe and Cornforth Co-op at the end of this row. Like the Station Town shop at the Colliery it was very large with an upstairs floor and a yard and outbuildings to the rear for the stabling of the carts and horses and the storage of goods. This street no longer exists and the shops have been replaced by trees and grass. The only building left standing in this row is the very first one over the railway crossings from the Dovecote. It used to be The Colliery Inn public house but it has been transformed into a lovely private dwelling.