A cracket was a useful piece of furniture. As well as being used for a seat it was also used to hold the tin bath for the miner to wash off his grime in front of the fire, his wife washing his back. Some miners in the olden days would not allow their backs to be washed in case it weakened them.

Near the fireplace was often the press. This was a large chest of tall drawers containing the family linen often with a narrow drawer at the top where the insurance policies and the store bills were kept. Some houses had a round table in the centre of the room. These pieces of furniture were of beautiful polished wood. The table would be covered with a plush cloth with heavy tassels. In the centre there was often a family bible on top of which would be a glass dome over a bunch of wax flowers. Round about it would be family photographs in frames. If a large family lived in the house there would also be a bed in the living room where the parents or elderly grandparents would sleep. Elderly grandparents were always looked after by their families.

Access to upstairs was gained by a ladder type staircase. Upstairs was more like a loft with a tiny window. The floor would be covered by cold canvas and as many beds as were needed in the room. If there were more children than there were beds they would be packed in sideways or head to tail. The only way to warm the beds was by wrapping either the heated oven tray or the stone ginger beer bottle, filled with hot water, in a towel. It was a spartan existence. If the family were lucky and had the room, they may have had a dressing table and a wash stand. The dressing table would have a square box for hankies and an oblong one for gloves. The wash stand with a marble top would have a much prized large basin and jug, a soap dish and a tooth brush vase. These, of course, were mostly for pride and show. They would have chamber pots to match.

The rest of the houses were more improved, perhaps by the coat owners. They had an extra sitting room where a prized sideboard would be or a "dess bed". This looked like a sideboard, but instead of drawers or cupboards the front could be pulled down to reveal a fold away bed.

Railway row had a back yard and a front garden. Cuthbertson Street had large back yards and Church Street which looked onto the churchyard boasted the jail house, a room at the end house where wrong doers were locked up until they could be transferred to court.

Though these dwellings were so poor, many were kept like little palaces and much pride was taken by housewives. They must have had to work extremely hard to combat all the dirt and ash dust, having to scrub the floors and wash the outside pavement into a half moon shaped clean area outside the front door.

There had once been some upstairs, downstairs houses running at right angles to Lord Street, one of which was a dame school.

The colliery houses for the old pit were much the same. Pit and Bicknell Streets led down towards the pit and were one up, one down houses. Higher up in the square there were some houses with an extra room downstairs. This room was a sitting room although there must have been precious little free time to actually sit in there.

The first Trimdon Grange Colliery houses were a few very primitive ones next to the pit in the area called "Five Houses Ower the Watter". Next to these was a row of houses with a descriptive name - Duff Heap Row, where Peter Lee was born in number 5. This was next to the first school building next to the signal cabin. Further down the village were the Plantation houses. Originally this land was plantation land, hence the name. The Plantation was made up of the following streets: Walter and Oswald Rows, Cross Row and Thomas Street. Again some were single and some were double houses and you often had to step down into the house from the outside instead of stepping up. The huge and nearby pit heap hovered over these houses. One day during the second world war, the slurry pond on the heap broke and the filth flowed into many of the houses on North Plantation. Later, private building took place on this land after the slums were cleared in the sixties. These were probably the last type of colliery house in Trimdon Grange and the land is now covered with smart modern housing. 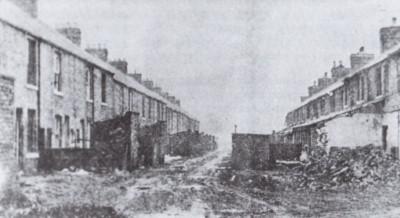 The rear of houses in Oswald Row (right) and Thomas Street - The Plantation.

As far as is known the old village of Trimdon (Village) remained largely unchanged although the addition of numerous private and council houses has made Trimdon Village into what it is today.