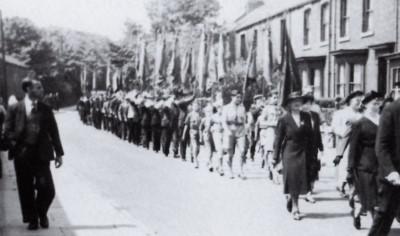 Procession to the dedication of the Church Clock. 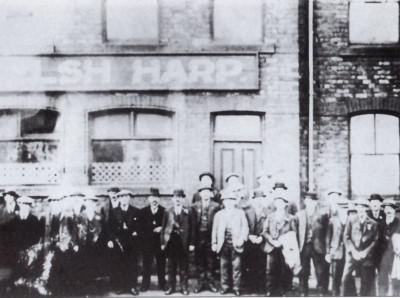 Officials outing in front of the Welsh Harp. Trimdon Grange 1923.

T.M.S. who were one of the pioneers of regular and reliable stage carriage services in the south west Durham, were formed by the amalgamation of two former Trimdon operating concerns, J. S. Grundy esquire with Paul and Seymour.

In 1919 Mr. Grundy purchased a second hand Ford model T, 6 seater bus which had been built in 1916. In 1922 this vehicle was exchanged for another Ford T one tonner with a dixie convertible body. This vehicle was used as a lorry on Tuesdays, Thursdays and Fridays to deliver groceries etc., for Messrs. Broughs of Wingate, on Saturdays by the local football team, on Sundays to special church services. And alternate Mondays it went to Castle Eden and Haswell markets for the Trimdons, Wingate and Wheatley Hill folk. Wednesdays it went to Stockton market and nightly it brought Kelloe folk to the Trimdon cinema.

Messrs. Paul and Seymour also started service with a ford t type and operated between Trimdon and Sedgefield on Saturdays and Sundays. They also ran special services to Winterton hospital on visiting days, otherwise it was used for private hire.

In 1924 J. S. Grundy and Messrs. Paul and Seymour each purchased a further vehicle, both fiats, and decided to operate a joint service to Fishburn for the miners. The tickets for this service were hand made from plain white card and stamped: on having made twelve journeys a person was entitled to a free ride, hence the introduction of the twelve journey tickets which later became popular. It was decided to operate a further joint service from Trimdon Grange to West Hartlepool in 1926 and to operate it as Trimdon Motor Services. Further vehicles were purchased and another joint service started between Trimdon Village and Wingate later extended to Houghton le Spring via old Shotton, Shotton Colliery, Haswell and Easington Lane.

A year later, the West Hartlepool - Trimdon service was extended to Durham via Coxhoe.

Both operators ran their own business until 1929 when they amalgamated to form a company known as Trimdon Motor Services Ltd., with the registered office at Trimdon Grange where it stands today (now empty). J. S. Grundy was manager, and a director, along with R. Paul and J. W. Seymour. The livery, adopted was blue and cream.

At the time, a great deal of competition was felt from United Automobile services, and also from small operators who bought buses and operated anywhere. It was a common sight to see a 'pirate' on the company's stand, and run ahead of the scheduled bus to pick up its passengers. This caused the company many headaches.

However in 1930 the road traffic act came into force, each operator ran a regular service was granted by the traffic commissioners, thus the pirates were shut out.

On the 1st May, 1953 another Trimdon firm was taken over, Alton brothers (Trimdon Ltd.) (A bee line subsidiary company). The T.M.S garage and offices occupy the land where a large wooden but stood. This was the main venue for entertainment e.g. visiting hypnotist etc. Later it became Duddins coal depot. The Trimdon Grange picture hall also stood there. Now the offices are all closed and we wait to see what happens in the future.
Page 71