Sunday
At last comes a day of rest. Sunday was like a holiday - the literal meaning of a holy day. All week, Sunday was looked forward to being an entirely different day in character to all the rest. No work was to be done at all except, of course, by the poor housewife who had an extra special dinner to cook - beef, pork, Yorkshire Pudding, garden vegetables, followed by rice pudding. Sunday best was also worn. These clothes were reserved for Sundays and special days until such times as new ones were to be had when the originals were relegated to second. The children would attend Sunday School in their Sunday best and then come home to their special dinner after putting on their pinafores to keep their Sunday Best clothes clean. After washing up - in a bowl on the kitchen table -they were often taken for a walk through the fields by their parents. This way the children of the time learned all the names of the wild flowers such as dandelion, daisy, honeysuckle, rose, orchid, scabious, dog daisy, cowslip, dothery grass etc. If they were not taken for a walk in the afternoon, they would often go after tea in the summertime.

No sewing or knitting was allowed - in fact, my grandmother did not allow scissors to be used on Sundays. Only religious books or songs could be used on the Sabbath and no games were played. After Church and chapel evening services, the teenagers would go round the 'hen run'. Older people popped in to visit their friends and if that friend or relative had an organ or a piano there was often an evening of singing - suitable Sunday music, of course! It's amazing considering how badly off people were, there was always a meal set for visitors. For supper there was always a 'fry up' of the remnants of the Sunday dinner. To some, these Sundays might seem rather dull but it was a day that was looked forward to all week. It was a real rest and a change and seemed to be a recharge of battery power for the week of work ahead.

A Sabbath well spent, brings a wealth of content,
And strength for the toils of the morrow,
But a Sabbath profound
What'er may be gained,
Is a certain forerunner of sorrow.

Dancing.
Life was sometimes enlivened by a night of dancing. In the village of Trimdon the only place for dancing was the Parochial School. The partition between the two classrooms downstairs was pushed back and the desks lined up round the room. The dancers could sit on top of the desks between dances. Music was provided by the piano, fiddle or concertina. This once or twice a year event was eagerly looked forward to and attended by folk from the surrounding area.

In Trimdon Grange, dancing could take place in what was once the school, by the signal box at the railway crossings. When the new infant school was built (now the Community Centre) it was taken over as a Church Hall. Another hall in the Grange was the 'Miners Hall' at the top of Tulip's field. Access to the dance floor was by a flight of high stone steps. Tulip's field was so named because the Tulip Family lived in the big square house at the bottom. 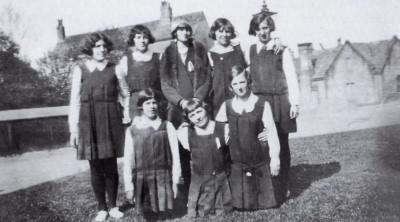 Trimdon Station was better off for dancing because it had the Church Institute built in 1912 next to the Foundry Boy's School. The highlight of the year was the G.F.S. (Girls' Friendly Society from the church). This was often by invitation, the cards being written out and delivered by the members. Members also got on their knees and polished the floor and then sprinkled powder all over.

The pianist could be someone called Newton or Alf Gray, with Sid Thomas on the violin and Sammy Jones on the concertina. This annual dance was held on Shrove Tuesday and each girl always tried to have a new dress for the occasion. The M.C. was often Billy Kennedy who announced each dance and conducted The Lancers. Another annual event was the Cricket Club dance. This dance would start on Friday night and finish by about 4 a.m. on Saturday morning, thus enabling the men on shift work to get home, washed and changed and still attend the dance. 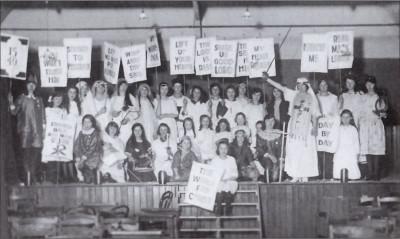