It happened on November 19th 1926, the year of the National Miners strike.

During Industrial Depressions, it was the practise of miners, at least in Durham County, to dig for discarded coal in the pit heaps.

At Trimdon Grange, two local men entered an abandoned cavern to obtain coal when the sides caved in, partially burying Herbert Owens, aged 21, of Oswald Row. His perilous position was soon realised but while other men were tunnel-ling to extricate him a further collapse of the sides took place, completely burying the man.

The would be rescuers increased their efforts to release Owens, and three times rope was passed under his shoulders and three times attempts were made to pull him out. The unfortunate man however, was wedged in, and the sides continued to fall. Shoring the sides with timber was resorted to. At 5.00 p.m. it was decided to make a new tunnel into the heap to endeavour to release him, and shifts of six men wearing gas helmets, worked frantically but it was 10.00 p.m. before Owens was got out, his body was in a very bad condition being almost burned by the nature of the heap.

Playing leading roles were two local men, Mr. John Beattie and Mr. Joseph Clark, who with total disregard of their lives, faced extreme danger. They were both awarded the George Cross for their brave efforts. 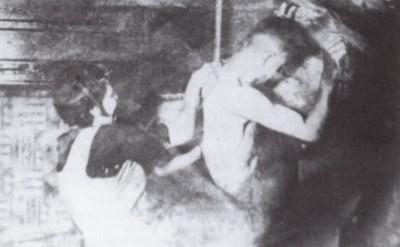 I'm sure that someone can tell me that I'm wrong but I just can't think of any other mining village whose pit heap dominated the village the way Trimdon Grange's did. It stretched from the back road leading from Trimdon Village to the Whinney Moors on the Kelloe road (the Back Ower Lorrin as we called it, although I have never seen this written down before and so I can't vouch for the spelling - or the accuracy of the phonetics for that matter) right down to the front street of Trimdon Grange and it skirted the Western Edge of this road from St. Alban's Church almost to the right hand turn into the new road down to Trimdon Col-liery. It was immense and its enormity was reinforced by the perhaps 80 degree angle of the slope as it rose to its summit of perhaps 150 feet. First time visitors to Trimdon must have been stunned by its dark bulk looming over the village, but to us its presence, though felt in several ways, usually went unnoticed. Generally speaking it was just there; though it was noticeable that in summer any part of the village which fell in its shadow - and that was the vast majority of it - tended to get an hour or two less direct sunlight than did the rest of the area. However, as if by way of compensation, in winter, when the snow came, Trimdon Grange was blessed with its own private Tyrol and, if in summer the pit heap looked drab and dirty, it was transformed spectacularly by the winter snow. >> 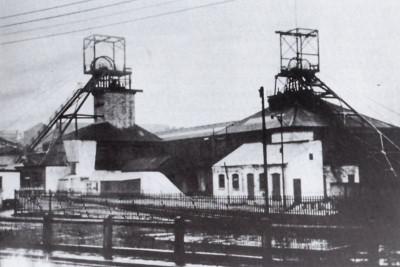